Press Release: NZ Conservationist ambushed by over a dozen pirates

On the night of 8 March 2022 an attempted boarding by local pirates took place on Captain Pete Bethune’s ship. Bethune had anchored his conservation vessel the Modoc after completing an operation.
At approximately 23:15, the ship was approached by 6 small vessels with an estimated 15 men on board. Crew member Brad Rooke, who was on security detail at the time, says he first noticed “what looked like a small flotilla of boats passing across our bow. This is not all that unusual. Then as they got close to our bow, a couple of them cut their engines and began drifting down our port side. Appa, our Belgian Malinois security dog, was going berserk at them. I still hadn’t realised that they were pirates. One boat was towing another, I guessed that they might need help with possible engine problems. Then I realised  they had latched onto the side of our ship and were clambering up, this was an ambush!.”

Several warning shots were fired into the water from an assault rifle, and the bulk of the men quickly climbed back down into their skiffs. Two pirates had continued to climb during the gun fire and appeared over the stern of the ship. Modoc crew member Larry Routledge emerged from the crew quarters to see the assailants coming over the railing. “I shone my spotlight on them, we were shouting at them, and another warning shot was fired from Brad on the flight deck. Both men reluctantly retreated back into their skiffs, and the 6 boats then reassembled well astern of Modoc”. They remained there for several minutes, with Modoc crew watching them through night vision goggles. The pirates shouted to the Modoc crew, although Modoc crew couldn’t hear what was being said. The collective group of pirates then all headed away.

According to Bethune, “the attack was well coordinated. Six boats all approached together. They all cut their engines at the same time, and drifted quietly down the side of our ship. They had prepared hooks to attach to the side of the ship, and latched onto us to attempt to board at the same time.

Bethune said they couldn’t see what weapons the pirates had. “Most probably they had firearms, but when they are climbing up the side of the vessel, their hands are too busy to be shooting. Once aboard it’s a different matter of course”, he says. “Regardless, it is likely that if the bulk of the pirates had managed the boarding, things would have gotten really ugly.” Bethune praised his crew and their ability to make good decisions under pressure. “We’ve trained for possible boardings by Pirates, and we always knew that one day we may face such a situation. Everyone did what they were supposed to do, and the end result was no one was killed or injured, and the boat remained secure. But it still shook us all up to be in another possible life or death encounter.

Bethune is reluctant to give away his location, other than to say it’s in South America. “We work closely with authorities here on joint conservation operations, and don’t wish to jeopardise this relationship.
Bethune acknowledges that the pirates returning is entirely possible and him and the crew remain on high alert. 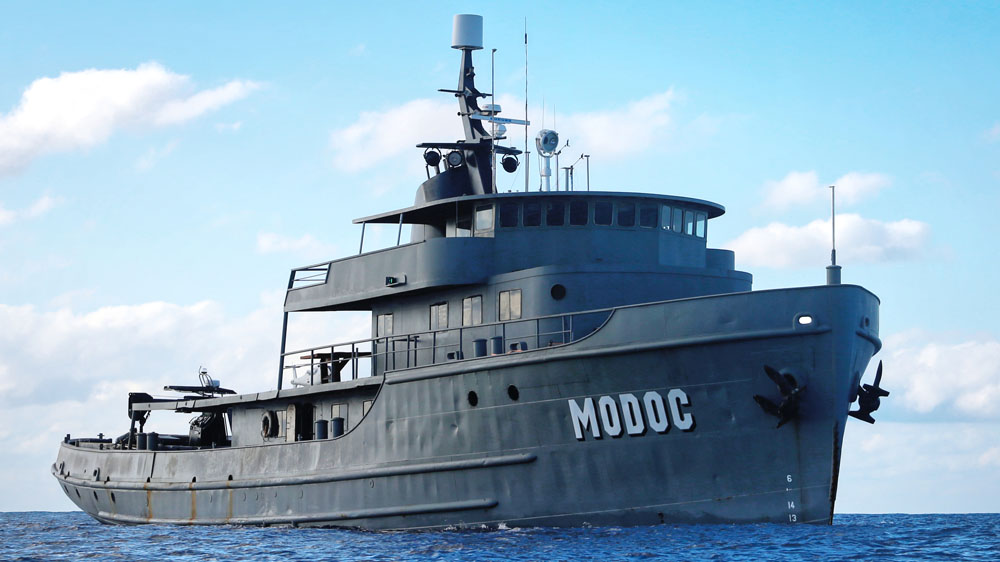