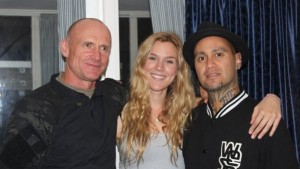 Superstar songbird Joss Stone somehow managed to find time in her whistle stop trip to New Zealand as part of her world tour to visit an island in the Waikato river where she planted trees with Pete Bethune of Earthrace and fellow musician, Tiki Taane, that will offer a safe haven to native birds.

She was helping a project designed to protect birds from possums, cats, rats and other predators that threaten them on the mainland.

They planted Rewa Rewa, Totara and several Kahikatea, a species of tree that can grow to over 60m high. Kahikatea were largely wiped out from the area in the 19th century after being exploited to make butter boxes.

On the mainland, possums and other predators compete for the same habitat and food as birds; they also disturb nesting birds, and eat their eggs and chicks. Few possums, cats, dogs and rats can reach the island so it offers birds a much safer environment.

Planting more trees will also help to stabilise the island, which suddenly began appearing near Taupiri in the 1920’s, since developing its own small but significant ecosystem.

Joss, who traveled over to the island in a white Sealegs amphibious boat, said “It’s great to be able to work with Earthrace on this; the birds have so many threats so to have a sanctuary on the island is fantastic. I’d love to come back when my trees have grown a bit to see how they’ve made a difference.”

The tree planting project on the island was started by Taupiri local, John Charteris, who encourages schools, groups and individuals to become involved in creating habitats that allow native birds and butterflies to thrive.