I have serious concerns about Scientists that continue to put large satellite tags on Orca and Sharks. The recent death of an Orca in Canadian waters all but confirms what many people have been saying – that the risks of invasive tagging is significant, and in many cases leads to undue stress, infection, maiming and in some cases, death of the recipient animal.

There are three problems with the tagging. Firstly, it injures the animals. The initial wound where the tag is fixed is significant, and in many cases it leads to bacterial and fungal infections. With time, the tag can end up maiming the animal. There is a long list of tagged sharks swimming around with severely messed up fins.

Secondly, it places the animals under considerable risk through stress. Sharks, despite their tough appearance, are very susceptible to stress related death. Many die after being captured by Anglers for example. And make no mistake the process for tagging sharks is brutal. They thrash about during capture. They are placed on a deck, something completely alien to them. Hoses are rammed into them to cover their gills with water – the entire process is an extended bombardment to their senses. That you release a shark after capture does not mean it has survived the ordeal. It swims away with a body full of lactic acid, and many will subsequently die.

Finally, tagging animals can adversely alter their behaviour. When you catch sharks, they are there for a reason, be it some sex, a seal colony to feed upon, or whatever. But when you release them after tagging, they will often leave the area. This may affect their ability to breed or feed, or in other ways we may not understand.

So all up, satellite tagging is bad news for the animals. It reduces their chances for survival. And we are talking about endangered animals like Great White Sharks and Orca. They have enough threats to their existence already, without Scientists adding to it.

I am not saying we must ban all tagging programs, but they should definitely be reduced. Take the Orca that died recently in Canada. It was from the Southern Resident Population, one of the most studied Orca Pods on the planet. Today there are just a handful of them left. Well meaning Scientists tagged one of them, and a few days later he died of a fungal infection caused by the tag. But it was a resident Orca – It stays in the same area. There is no great mystery over where he was going to go, so why even bother with tracking him.

Or consider the recent Ocearch Shark tagging program in Cape Cod. In fact they recently raised $160k on Kickstarter to help fund their work and I put in $10. Which I kind of regret now. Anyway, the state authority refused to issue Ocearch a tagging permit, so they moved offshore to federal waters where they tagged a bunch of Great White sharks. After the research they were claiming to have finally confirmed the area was a nursery. But Scientists already knew the juveniles were out there. Fishermen have known it for decades. Of course it was a nursery. It was no great mystery. They also said the research data would be made publicly available. But the Shark Scientists I’ve spoken to about this all felt it was of little Scientific merit. It just wasn’t worth the risk.

Now Scientists have been satellite-tagging animals for years – And it has increased our understanding of many species. I accept that. But I believe the time has come to stop the practice in all but the most justified of cases. Satellite tagging is a brutal invasive procedure that kills many animals and injures others. Lets just leave them alone, and do our Science by less invasive methods. 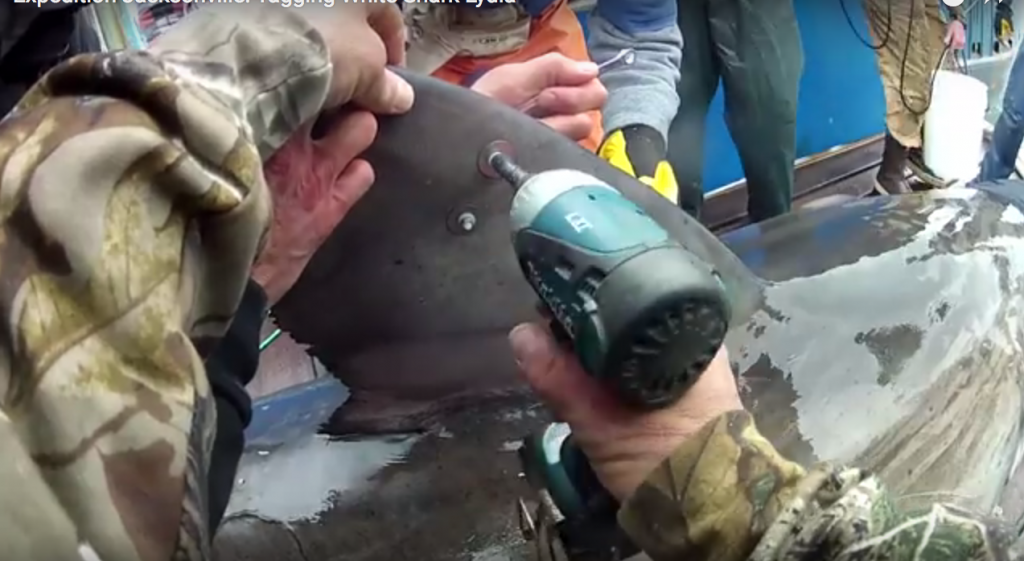 Tagging Sharks and Orca is a brutal Process