I was disheartened last week when people started messaging me Watson’s latest nonsense alleging my knifing in Brazil was all a fabrication. It’s not the first time he’s posted to his many followers such vitriolic lies. And it is most ironic, given Watson’s long history of lying and faking stuff.

Watson’s main evidence was because I never posted images of the wound. Below is said image, taken on my laptop after I’d cleaned up the wound and before I went to hospital. There is also an image on my wall of Jason taking the stitches out back in NZ. And part of the Police report is included below for good measure. 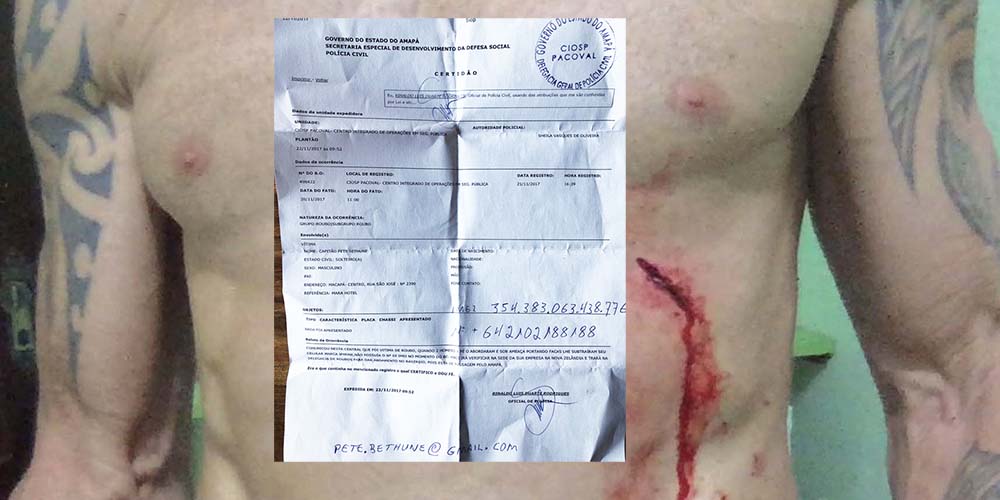 The sad part in all this is I am forced to go defending myself to a sad old man who’s organization I resigned from 7 years ago. He doesn’t need to bother with me anymore.

The reasons I’m writing this rebuttal however, is his ongoing lies falsely denigrate so many members of my team, police and enforcement units, and other NGOs. As an example, while working against illegal gold miners in Costa Rica, our team twice came under gunfire, and Watson had the temerity to say it was all faked. We were deployed with local Police and the MINAE Rangers. Not to mention the former military personnel on our team. Does he really think all those people would allow us to go faking gunshots in a TV show? Here is a short clip, faked according to Watson). https://www.youtube.com/watch?v=7hl2ReC9GEQ&feature=youtu.be

Then there is the dolphin we rescued in Indonesia where we linked with a local NGO. He alleges this was all faked. Here’s us heading in to do the rescue. https://www.youtube.com/watch?v=4kNgKGK35hs Anyone wanting the full episode is welcome to email me on pete.bethune@gmail.com We deserve an Oscar for acting if we really did fake that. Not to mention one for the CGI of the dolphin. Watson I’d suggest is jealous that despite raising millions of dollars to save dolphin in Taiji, he is yet to actually save one.

Here’s a joke. How can you tell if Watson is on a boat? It keeps whining after the motors are turned off. Sad but basically true. All Watson is capable of these days is saying how amazing he and his followers are, while whining and whingeing about everyone else.

The amazing thing in all this is Watson has such a long history of dishonesty. He claims in his book “Earthforce” that it is OK to lie, as long as you are doing good. He further suggests if you repeat a lie often enough, it will become the accepted truth. Sadly Watson continues to use such tactics in denigrating myself and others.

His lies of course are well documented. In the ruling of the case of Ady Gil versus Sea Shepherd, the Judge said Watson was completely lacking in honesty. This despite Watson for years saying he’d win the case and everyone else was lying about the scuttling of the Ady Gil.

Watson of course faked his own shooting. He tried to make everyone believe his kevlar vest and officer’s badge had saved him. Like a bad 70s western. One of the crew involved confessed exactly what happened. And anyone with an even basic knowledge of ballistics can tell its faked. Here is the video. Judge for yourselves. https://www.youtube.com/watch?v=dM0mde0UsBk

The biggest lie Watson propagates however is his being vegan. What a joke. I cannot believe he has gotten away with this lie for so long. On my first dinner with him in Friday Harbor, he orders Scallops. At lunchtime the next day he buys sushi (with fish in it). In the afternoon at the Sea Shepherd head office and staff are busy sending his girlfriend Salmon, on donated funds no doubt.

I remember during an interview with media in Freemantle and a Journalist queried Watson about being vegan. “All my ships are run vegan”, he’d replied. Which is kind-of true. What he failed to mention was the fridge in his cabin, chocka-block full of non-vegan food. I know this because while in port I’d helped his PA get a new, bigger fridge and we had to swap the food over from the old one.

Ask yourself this – Do you know a single vegan who is as overweight as Watson? Easy to get overweight like that when you are eating dairy fat and animal fat of course.

Ask any former Sea Shepherd people no longer with the organization and they’ll either say “Watson is not vegan”, or they’ll avoid the question. Senior SSCS staff all know he’s not vegan, but no one says anything for fear of having the wrath of an unhinged old man unleashed on them.

Those of you wanting to message me about “why can’t we all work together”, the fact is most of us can. We’ve worked with Greenpeace, Forest and Bird, WWF, WALHI, JAAN, and many other NGOs. I don’t agree with everything they do, and they don’t agree with what we always do. But that doesn’t stop us cooperating. We’ve also worked with enforcement units from a whole range of countries, and we continue to do so. Like most NGOs and units however we cannot work with Sea Shepherd because Watson is a Narcissistic Liar who can not be trusted.