Getting the Best from a FLIR Thermal Imager

It was 2006 when I first discovered FLIR.  We had just completed construction of our futuristic trimaran Earthrace that was about to attempt the round the world speed record, and we were in Portland for a couple of days of promotions.  Andrew Cox from FLIR was checking out the boat, and he started asking a few questions.  We were open to the public in any case, and Andrew was just another punter interested in what was a very cool boat.

At the time I knew nothing of FLIR.  Andrew explained how their technology works.  Unlike most camera or vision systems that rely on ambient light, FLIR works on temperature instead.  It gives you an image based on temperature profile of what is within the field of view.  And at times it can be quite remarkable in its ability to show things hidden from eyesight, or traditional low light systems. Never the less I wasn’t really convinced I needed one of these fancy gadgets.  I explained to Andrew our budget was tight and we didn’t really need one.

“I tell ya what” said Andrew, with a confident smile on his face.  “I’ll give ya one to trial for a month.  If at the end of that time you still don’t think you need one, send it back.  No questions asked”  I agreed to the proposal, thinking I’d play with it a few times and drop if back to them. 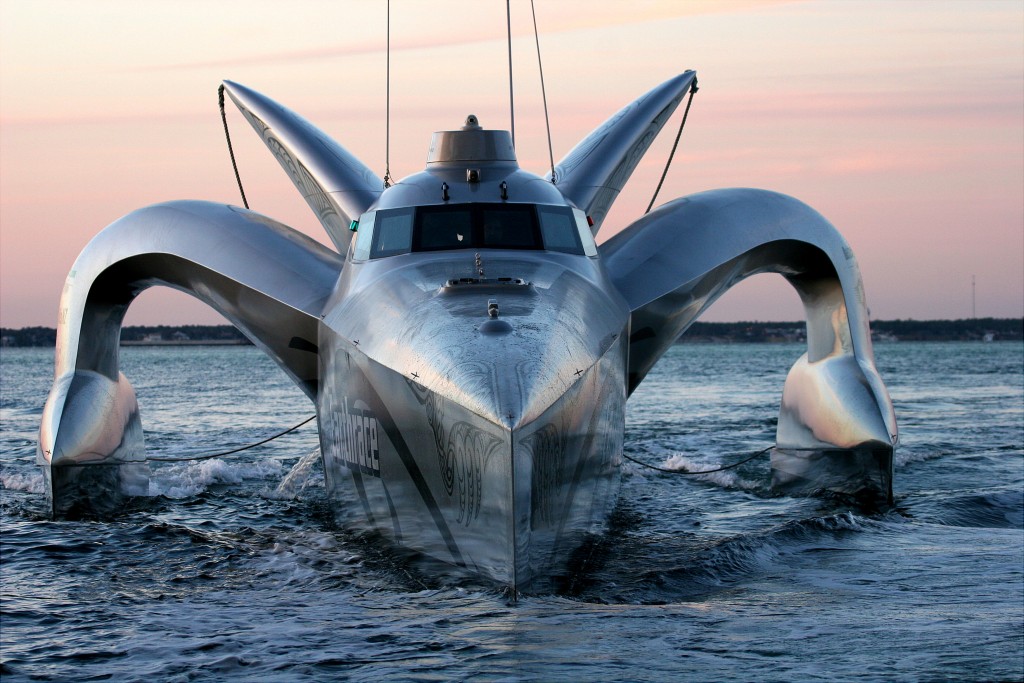 Earthrace in 2006, with our first FLIR system on top of the Radome

Well that was in 2006.  I never gave the system back.  And since then I’ve deployed with a whole range of FLIR systems in various capacities in Africa, Asia, Central America and Antarctica.  I’ve also now trained various jungle and marine Ranger teams in night patrols, and it’s made me think really carefully on when its best to use a FLIR system, and it’s strengths and weaknesses.  So I thought I’d share a few of these with you.The first lesson is that FLIR systems are a key part of running operations safely at night, but they are not the panacea of night operations.  Rather they are another valuable asset that complement the various tools a Captain or Operator should have at his / her disposal.  On ships for example, other elements such as Radar, AIS, GPS, eyesight, Binoculars and VHF all remain part of your arsenal in navigating safely at night.

There are however many cases where the FLIR is truly invaluable  We do regular “Man Overboard” drills, and at night, the FLIR system is simply outstanding in its ability to detect a head in the water, and in any light conditions.  If there’s a decent moon showing, and your target is in the right angle, you can get away without the FLIR.  But take a cloudy night with little ambient light, and it’s a much harder challenge. The FLIR works regardless of light conditions, and it doesn’t make much difference in the target direction in relation to moon, lights, wind, current etc.  Also, it doesn’t matter if you also have a spotlight working a search area, the FLIR continues giving you the same great image

The difference is even more pronounced when you have strong heat generation in what you are targeting.  We’re run a lot of enforcement campaigns targeting illegal fishing in Marine Protected Areas.  You put a small boat in an MPA with an outboard motor and I can detect it on my FLIR from a mile away.    Humans show up reasonably well, but a hot outboard motor sticks out like a pair of dog’s balls.  On big boats it is even more pronounced.  We can pick up a smokestack on a ship at a distance of many miles..

Another consideration for us is we can film targets without them knowing.  Consider an illegal fishing operation – We would normally look to gather video evidence for prosecution purposes.  We can pull in close to a vessel fishing illegally, and as long as we don’t turn on our spotlight, they will very often continue fishing.  This allows us to zoom in on our FLIR and film them actively engaged in fishing, and this will stand up in a court of law.  Turn on a spotlight of course and the fishing usually stop straight away.

Another area the FLIR excels in is an Observation Point (OP) in the jungle at night.  We set up one of these in Costa Rica once, where there were illegal miners coming in through a jungle trail.  We found a ridge where we could see down the trail for at least 100m.  Tropical jungles are tough for traditional NVG, as there is so little light under the canopy.  You can of course run IR spotlights with the NVG, but that is now another piece of equipment the Operator must carry and maintain.  Also, even with IR spotlight, a human does not really show up that well at a distance.  IR spotlights can also give off a slight red glow that can be seen with the naked eye.  With the hand held FLIR unit, we don’t worry about any of that.  We could easily see people as soon as they entered the trail, and they also had no idea we had them under surveillance. 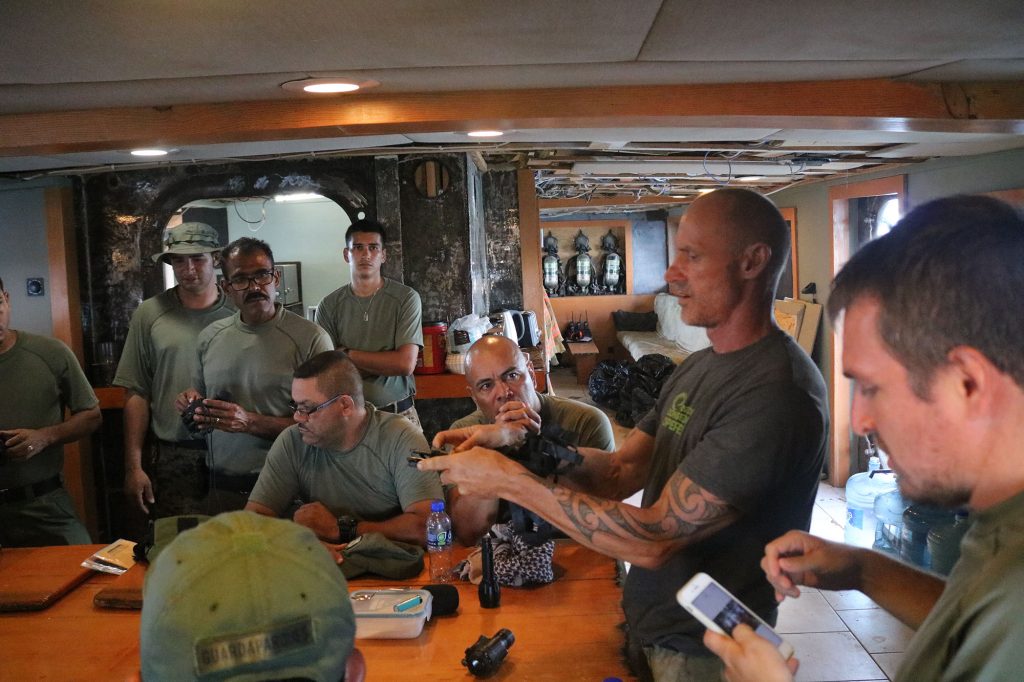 All up I see FLIR as a really valuable asset that can make both maritime operations and jungle patrols safer and more effective. There are of course  a few limitations and I’ll touch on these now. Consider firstly a MOB where the water is choppy.  The water splashes over the persons head, and now the body surface temperature, as seen by the FLIR at least, is similar to the water.  This reduced contrast makes detection harder.  A lesson for all crew then is if you fall overboard, do your best to keep your head dry and above water, so the FLIR operator has the greatest chance of seeing you,.

I’ve also found over the years that in rain, the contrast with objects reduces.  I saw this in The Philippines where we were navigating a narrow channel, and it was all too easy until a dump of rain came down, and for a period, it was necessary to slow down in order to see what was around us.  I’ve also found  that early in the night there tends to be the greatest contrast.  This is because different objects dissipate heat at different rates, depending on their heat emissivity, and also on their thermal mass.  Concrete structures for example retain heat for considerable period, and they will continue to be highlighted well into the night.

The final thing I’ll touch on here is service.  I’ve had a few technical challenges with these systems over the years, and FLIR have always been quick to sort it out.  In one instance all I needed to do was upgrade the firmware, and the tech support guided me though this in no time.  In another  instance,  we were wanting to film from a hand held unit that didn’t come with the filming option.  Because of our conservation work, FLIR engineers modified our system and gave us the capacity.

Because of all this, I really rate FLIR technology and their support.  Their hardware certainly gives us an edge in maritime and jungle operations.  It helps keep our teams safe, and makes our operations more effective. 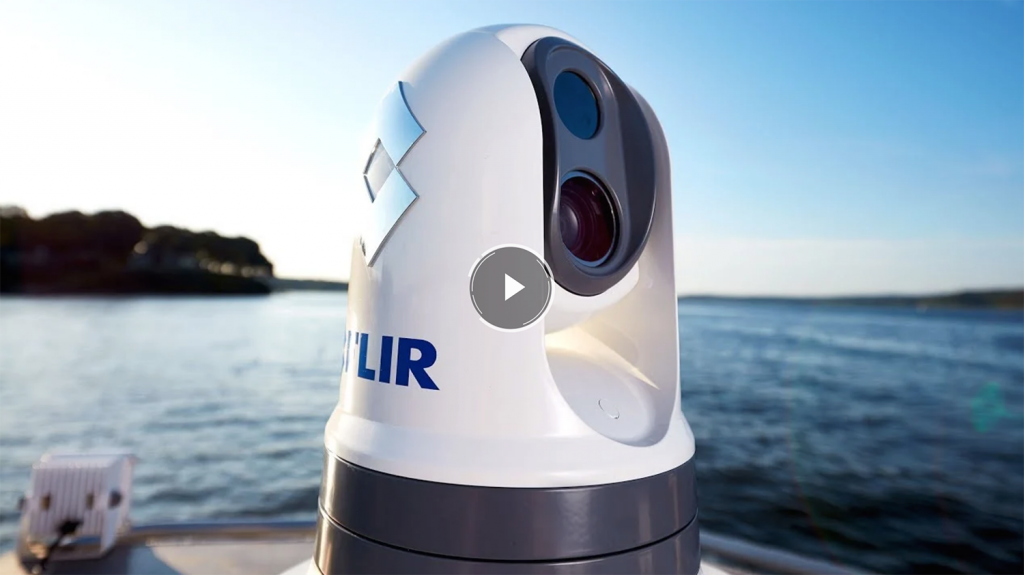 The FLIR M300 which is commonly installed on boats these days